REACQUAINTED AND SHE LOOKS SO GOOD-Part One 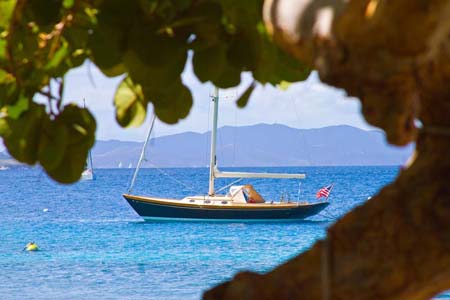 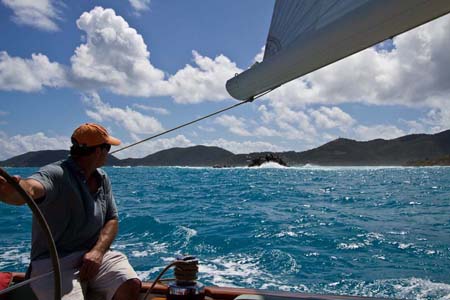 This is me on the morning commute down to Peter Island


“Some people have all the luck” is what my daughters always tell me when it comes to traveling for my job. Imagine presiding over a successful yacht design company and a high quality yacht building company… oh the places you have to go.

When I return from a business trip to locations such as the north island of New Zealand or Palma de Majorca, Nantucket, Newport Beach, California or Cartagena Colombia it is always a bittersweet time. While it is always great to be home I am usually leaving behind great memories of sea trialing a new one off design or commissioning and delivering a newly built Friendship to an excited new owner.

This past winter I was requested to join a meeting on the first yacht that I ever designed that was over 100’. I was asked to redesign the rig for a taller, lighter carbon fiber mast and sail plan for the 115’ TENACIOUS (ex TEEL). She was sitting at anchor down in Little Harbor on Peter Island. Just weeks before this, I had received a call from the owner of my first Friendship 40 MANAAKI informing me that he intended to bring MANAAKI back to Rhode Island for the summer of 2012 and list her for sale on the brokerage market.

I sold MANAAKI to her current owner in 2009 and delivered her to the BVI’s via Dockwise then helped commission her and deliver her to the owners island home of Eustatia. So it was business as usual when Ihad to combine a design meeting on board TENACIOUS with a brokerage inspection of the soon to be listed MANAAKI.

MANAAKI’s owner suggested that I should come to the BVI’s to do a pre-listing survey to insure that the boat will be in tip top shape when she hits the market in Newport this summer.

It did not take long before I had a plane ticket and ferry organized to get to the islands, pick up and provision MANAAKI and get down to Peter Island for the design meeting. It is a tough job but someone has to do it.

The first leg of this interesting business trip involved getting aboard MANAAKI, provisioning her for a five day excursion and casting away the lines to set out to find TENACIOUS. Just before heading out I received a call from the captain on TENACIOUS informing me that the meeting was going to be delayed for a couple of days. “Let’s meet on Wednesday morning” was all I needed to hear. So the exciting question… where now? Why not try the Bitter End, after all it was Monday, has anyone heard of the Monday Night Mash Up that takes place down there?

The Bitter End is not only home of theYacht Club but it is also now home to the Caribbean station of the Yacht Club Costa Smeralda. It just so happens that we are fortunate enough to have Friendship 40 hull seven, named Rambaza Mawimbi (surf the waves in Swahili) moored in front of the Yacht Club Costa Smeralda in Puerto Cervo on the island of Sardinia. I have been told by many that the club’s new Caribbean location would be a great back drop for the Friendship 40.

I had to check it out for myself. Sure enough, the new club house and surrounding facility is amazing… the view from the pool alone makes the visit worthwhile.

The club house is carved out of the side of a steep green wall of tropical vegetation, the elevated infinity pool is a sight to behold as is the fantastic new marina which is capable of docking the largest mega yachts. While it was quiet for my visit, the upcoming weeks were going to be in full race mode with the club hosting the Loro Piana Caribbean Superyacht Regatta.

To see what has been built down there go to:  www.superyachtregattaandrendezvous.com to view the facilities and the exciting racing that went on just after my visit.

Tuesday morning it is back to work and time to meander down to Peter Island, but not until I spend some time marketing the Friendship 40 to the countless European bare boat charterers at the many beautiful anchorages. Ironically, three days after I returned to my office we had three email inquiries from potential buyers stating that they saw this stunningly beautiful sailboat tacking around in the close anchorages and they wanted to know more about the boat. Exactly the outcome we were hoping for. Here we are drifting through another of those crowded anchorages.

Finally after an afternoon of sailing I decided to pull into Sprat Bay Marina on Peter Island. Peter Island Resort and Spa is a beautifully quiet and relaxing place. The marina manager and nearly everyone that passed by could not have been more pleasant. Could it be they were nice so they could get onboard and inspect what everyone said was the prettiest boat that they had ever had at their dock…? 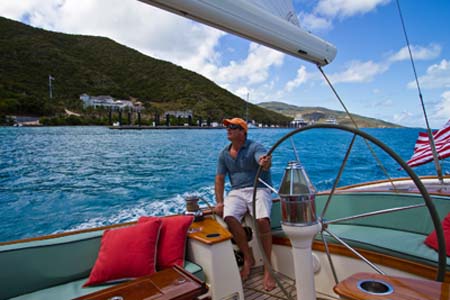 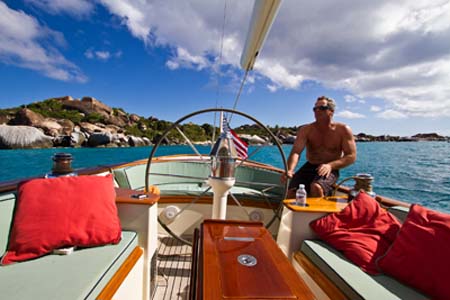 Another hard mid-winters day behind the desk burning the afternoon oil... 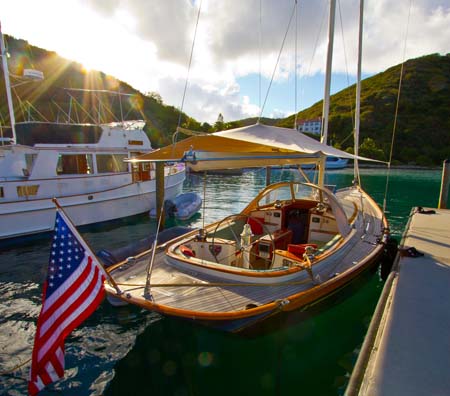 To be continued next week, please check back for Part Two of Ted's Log and Tenacious in the BVI's.